Recently, the “Rescue Performing Animal Project Proposition,” authored jointly by numerous circus groups, accused and questioned the Project. According to the proposition, the Rescue Performing Animal Project opposes animal domestication under the name of charity, which threatens the livelihood of circuses. The list attached to the proposition revealed that 238 circus groups participated in this condemnation.

Chunmei Hu, Head of the Rescue Performing Animal Project, told Red Star News that in 2016 the Project detected 19 problematic performances after 35 surveillance executions. Some of these were handled by management departments, while others are expelled or rectified.

The initiator of the proposition, Jinsheng Yu, Head of the Hebei Qunyi Circus, said: “We feed the animals well and treat them as we would treat babies. The volunteers of the Rescue Performing Animal Project are too extreme. They accuse us of being abusive if animals are in the cages, and consider setting up tents for performances illegal.”

Yu claimed that no explicit ban on circus performances exists. Thus, the Rescue Performing Animal Project doesn’t have any legitimate justifications for inciting volunteers to repeatedly obstruct performances. Yu pointed out that out of the many circuses in China, although some don’t meet the requirements, most do. 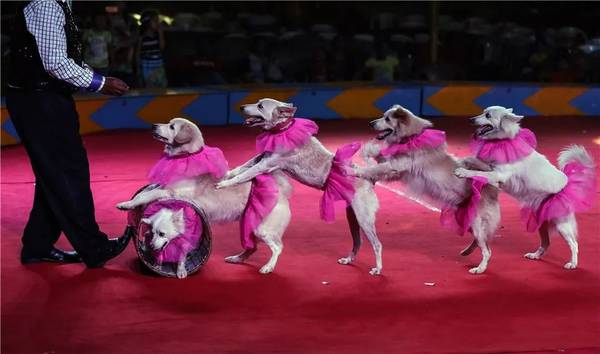 Zeying Yu, Deputy Secretary-General of the China Zoo Association, believes that animal protection organizations oppose circus animal performances mainly because the survival status and “welfare” of wild animals during mobile performances are difficult to guarantee. “The living conditions of zoos are better than those of circuses, though we still often receive complaints from animal protection organizations.”

Yu acknowledges that she supports the animal protection organizations in supervising the zoo, but opposes the information fraud, inaccuracy, and faulty generalizations in their complaints.

Regarding the news that many zoos and circuses have severed their partnerships in recent years, Yu indicated that the zoo industry is not “blocking” the circus industry. The two industries simply disagree on the treatment of animals. She thinks that circuses have reached a turning point of life and death which cannot be resolved by the zoo. Circus workers who had once sought help from Yu pleaded that without support from the zoo, the workers will become homeless. As a result, the circus animals will also suffer from worse living conditions. She helplessly responded: “There’s nothing we can do.”