On June 17th, Father’s Day, also the second day of the Dragon Boat Festival holiday, on that sunny early morning, volunteer He of the Fluffy Doll House Volunteer Group woke everyone in his group up: “Let’s quickly get ready! It’s time for moving! ”.

At around 6:30 am, enthusiastic Fluffy Doll House members and rescue station volunteers arrived successively at the rescue station, and started getting busy under the managers’ command.

They had to move more than 40 dogs, 17 dog cages, and hundreds of household items such as fences, cabinets, dog food, and medicines. Besides, there were many trivial objects, and the project was huge. Everyone was highly efficient because of the mutual understanding that existed among all people present. By noon, they have already transported everything to the new station in Qiqi Town. 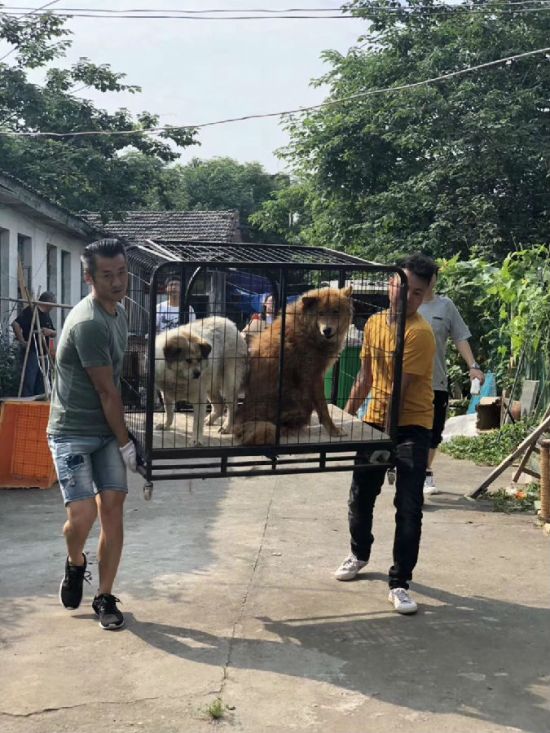 According to the report, the building of the Fluffy Doll House’s old station is not only about to be demolished, but also severely polluted. Because of ongoing construction at the surrounding construction sites, stinky and heavily polluted water accumulates whenever it rains. As a result, dogs living in the old station have an increased chance of becoming ill. With assistance from all sectors of society, donations amounted to more than 50,000 yuan, which funded the relocation. However, in fact, it took more than 70,000 yuan to build a new station and successfully move into the station. Labor and supply costs have not yet been settled, and 20,000 more yuan is still needed.

Established in March 2016, the Fluffy Doll House is the only grassroots stray animal rescue station in Huangshan. Initially, it had only three to five employees. The rescued stray dogs were each housed in an employee’s own storage room or warehouse. As the number of rescuers increased, they began to annoy the neighborhood. Thus, Mr. Sun suggested that they move into the old factory building of Tunxi Welfare Factory. This is the third time it has moved to create a better living environment for dogs.

By this April, the Fluffy Doll House had rescued 221 stray dogs in two years. A total of 177 were adopted. The dogs currently in the station are mostly disabled dogs, sick dogs, and young dogs.

At present, more and more stray dogs are being housed in the Fluffy Doll House. Those working for the Fluffy Doll House hope that the government can provide vaccination and sterilization for dogs, in order to solve the stray dog problem through targeting its root cause. In addition, instead of euthanization and other forms of killing, adoption should be widely encouraged.