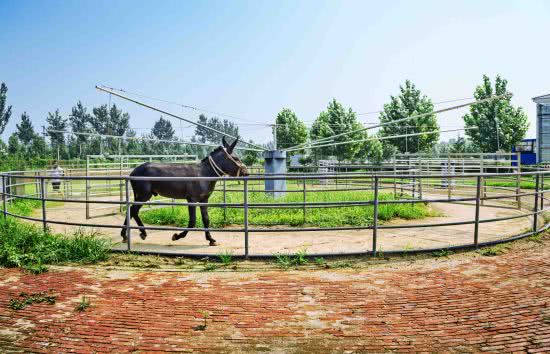 How to maintain the balance between animal welfare and productivity and maximize animal welfare in the commercial farming process is an important topic for international animal welfare organizations. To this end, experts from the World Farm Animal Welfare Association, the Donkey Sanctuary, and the China Agricultural International Cooperation Promotion Association went to Dong’e Ejiao in August 2018 to conduct site visits to investigate the farmed donkeys’ welfare and discuss how to improve welfare and create more comfortable “homes” for donkeys. Dong’e Ejiao is a company that produces a type of condensed gelatin called “Ejiao” from donkey skin. In traditional Chinese medicine, Ejiao is used to improve the immune system and treat anemia.

Dr. Karen Rickards, an expert of welfare standard assessments at the British Welfare Association, spoke highly of Dong’e Ejiao’s efforts in improving donkey welfare. “The welfare of Dong’e Ejiao is very good in general and it is even better than those in the UK in some aspects such as providing sand pits for the donkeys.”

Dong’e Ejiao Welfare is also highly recognized by Stephen DeRoz, a professor of Small Animal and Horse Breeding in the Department of Clinical Veterinary Medicine, University of Liège, Belgium.

As early as August 2017, at the First International Donkey Industry Development Academic Exchange Meeting, more than 400 experts from 16 countries gathered in Dong’e Ejiao to discuss the frontier topics in the development of the donkey industry and animal welfare.

Dong’e Ejiao advocates the rational use of animal products while protecting animals based on the principle of “common but differentiated.” It believes that the trade of animal products has its rationality and legitimacy, but at the same time, people should severely crack down on the illegal slaughter of smuggled animals and their biological products.

Not only the welfare of the donkeys has drawn a lot of attention, but the welfare of other animals has also received extensive attention and emphasis in China with remarkable results. At present, the world’s largest and most widely participated animal welfare conference, the 2nd World Farm Animal Welfare Conference, was successfully held in Beijing on October 24, 2018.

All information comes from news.html5.qq.com