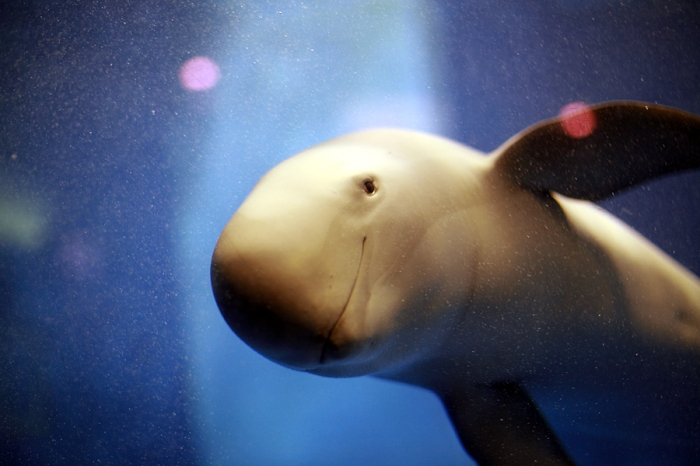 In the upper reaches of the Nanjing section of the Yangtze River, a bridge has been planned to connect two districts of the city across the river.

At first, the bridge was designed to be a three-tower suspension bridge. The program aimed to minimize the impact on the finless porpoise, so only one tower was set up in the river. However, this design was eventually denied.

“To minimize the impact on the finless porpoise, we have adjusted the plan again with the design unit,” said Wei Chen, an engineer at the Nanjing Public Construction Center.

According to the adjusted design, the three-tower suspension bridge was changed to have two towers which would be placed on two islands in the river respectively. In other words, there would be no bridge tower in the middle of the river, which may affect the activity and habitat of the finless porpoise.

At the same time, the bridge line was moved from the edge of the core area of ​​the Nanjing Yangtze Finless Porpoise Provincial Nature Reserve to the buffer zone outside.

After the revision, as the three towers become double towers, the span increases, and thus the corresponding investment amount and technical requirements would also increase.

The Nanjing Ministry of Ecosystem and Environment commented that scientific planning would yield the highest benefit. Indeed, it is difficult and costly for the modified bridge design plan to make way for the finless porpoise. Nevertheless, if any planning mistakes hinder the recovery of the finless porpoise population, a higher cost may be necessary to remedy the problems. At present, there are only more than a thousand finless porpoises in the Yangtze River, and their “critically endangered” status has not changed.

Since 2014, Nanjing has demolished and relocated all the production piers of between the city’s second and third bridges across the Yangtze River. The city also released more than 300 million fish hatchlings to increase the food source of the finless porpoise. Meanwhile, fishing in the river section below the Nanjing Third Yangtze Bridge in the protected area was banned entirely.

At present, it is the breeding season of the finless porpoise. Since March, many citizens have observed pairs of finless porpoises in the waters of the Nanjing section of Yangtze River.

Photos and information come from