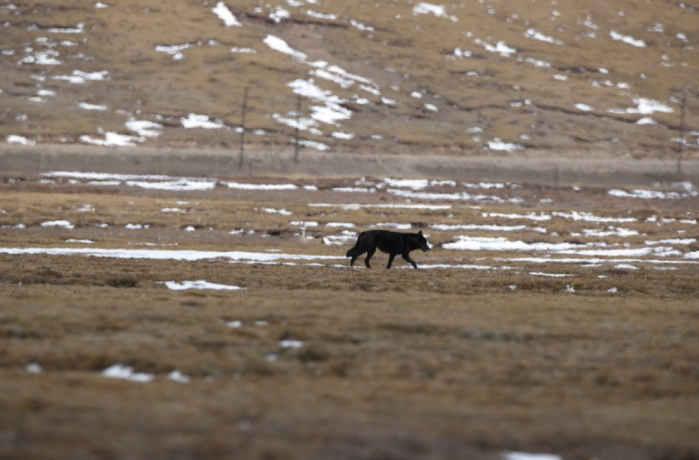 Recently, World Wildlife Fund (WWF) photographed a very rare female black wolf in Sanjiangyuan National Parkduring a water bird survey conducted with in the Yellow River Source Area. This is the first time that this species has been recorded in this area, confirming the existence of the black wolf in the wild in China.

The wolf had pure blackbodyand white edges on the lips, which was drastically different from the deep yellow and grey fur of the common grey wolf. Li, a survey member who photographed the black wolf, recalled that the black wolf was found on the Gobi Desert, where the surveyteamtracked the black wolf for more than 30 minutes. During this period, the black wolf attempted to hunt Tibetan gazelle and pika, and she eventually went farther into a dry river bed.

The black fur of the wolf is coded by a recessive gene, which is more common in wolves in North America, but very unusual in Asia. Scientists and front-line workers have occasionally heard accounts ofblack wolves from herdsmen, butthere is almost norecorded image data. Hence, the black wolf image taken this time is incredibly precious.

Dr. John Mackinnon, a world-renowned biodiversity conservation scientist, confirmed that this was a black wolf after reviewing the images taken by the investigation team. According to Dr. Mackinnon, since the Sanjianyuan area is open and often covered by snow, wolves with the dominant trait of light-colored fur have better chances at survival, and the percentage of the recessive black-fur gene is very low within the wolf population. For a wolf to have black fur, both parents need to possess the recessive black-fur gene, which is an event of extremely low probability. Therefore, the rare occurrence of a black wolf may suggest the population in Sanjiangyuan is in very good shape in terms of reproduction.

Dr. Jie Xie, an associate researcher at the Institute of Zoology of the Chinese Academy of Sciences, also believes that this discovery is of great significance and substantial value to the study of wolves in China. She hopes this information can lead more scholars to conduct in-depth research on Chinese wolves, and she also hopes it will help increase the strength of protection from the public and relevant institutions.

All information and photos come from WWF China