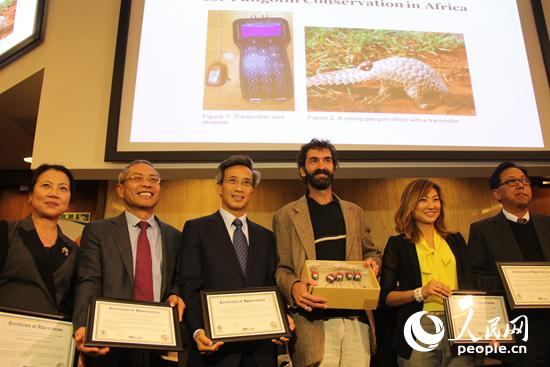 With the support of Chinese communities in Africa and Chinese enterprises, the conference donated GPS tracking devices to the African Pangolin Working Group (APWG), the most influential pangolin protection organization in Africa.

According to Ray Jansen, the chairman of APWG, the world’s pangolins are facing severe survival threats. The GPS will be used to track saved pangolin for scientific research and pangolin protection.

Professor Ebrahim Momoniat, the Headmaster of Science College of the University of the Witwatersrand, represented the university to welcome the participants. He noted that so many representatives from different industries have gathered for this conference to resolve the dilemma of wildlife conservation. What’s more important was for all of them to concur on feasible solutions to the problems faced by Africa-China wildlife conservationists.

H.E. Ambassador Lin of China mentioned the two-day celebrity event hosted by the Chinese Embassy in March, which collected 200,000 rands worth of donations for Kruger National Park. He was so delighted to see that Chinese civil groups and organizations have taken up the initiative to hold this conference three months later. This conference provides “a great opportunity to communicate China’s wildlife conservation policies and measures to the South African and African people.”

As Lin has said, the Chinese government has recognized the vital importance of wildlife protection in recent years. Since January 1st,2018, ivory trade has become illegal in China. Nowadays, fewer instances of wildlife poaching have been reported in China. As for illegal poaching by the Chinese ethnic minorities, the Chinese government will take a “zero-tolerance” attitude, and will cooperate closely with African countries to end these activities.

“This year marks the 20th anniversary of Chinese-South African diplomatic ties. We are willing to deepen mutually beneficial cooperation across the board. We can bring more benefits to the peoples of China and South Africa, and make new contributions to the cause of wildlife conservation,” said Lin.

According to Frances Craigie, the official of this country’s Department of Environmental Affairs, the Republic of South Africa is the biggest victim of illegal wildlife trades. To terminate illegal wildlife trading, the South African government has implemented numerous policies and measures. Meanwhile, the government has advised peoples to use natural resources properly and develop local economies, especially in rural area, to protect the nation’s unique biodiversity.

Mrs. Yanqing He, the director of the Humane Society International (HSI)’s Chinese branch, perceived this conference as precious and commendable. “When it comes to wildlife protection in Africa, people frequently mention elephant or rhinoceros. But this conference is focusing on pangolin, a rarely noticed species,” she said.